For the aesthete, there’s almost nothing worse than seeing a nubile young beauty in ill-suited couture. Nothing, except perhaps a bouquet of flowers in a mismatched vase. The horror indeed!
While most people would just avert their eyes from such instances of floral injustice, we’re going to take the proactive measure of offering some top tips for choosing the right vase.

Thousands would argue differently, but we’re digging our heels in on this one. Trust us, you don’t want your flowers to look as if they’ve borrowed their chubby cousin’s glad rags; neither should you attempt to rewrite the tale of Cinderella and her sisters by forcing a chunky stem into a glass slip of a vase that’s clearly designed for more petite flowers. One slightly tired gerbera pouting from a slinky Coke bottle will look far more glamorous than a healthy bunch of freesias drowning in a giant crystal trumpet.

Tip 2: It’s what you’ve got and what you do with it that counts

Whether you’ve been given a gift-wrap of a dozen or so stems that you’ll be arranging yourself, a sumptuous hand-tied bouquet ready to plop straight into a vase, an assortment of tropical flowers or a single rose, you’ll need to consider your flowers carefully if you’re hoping to create a maximum-impact display.

Start by looking at the shape of the flowers, and don’t be shy of leaping to logical conclusions. Tall stems such as gladioli really do like taller vases, and flowers with bare stems and an abundance of flower heads do well in trumpet-shaped containers that offer a supporting collar to lean on at the neck.

Tip 3: Shape up or ship out

Slender, curvaceous or perfectly plump – you can tell a lot about the character of your vase from its shape. Make sure you work with the whimsy of each vessel, or your arrangement may run aground.

The column vase – Twiggy: This is the no-nonsense tomboy of vases: straight up and down, literally as well as metaphorically. Like the 60s supermodel, the Twiggy vase is well admired for its versatility. It can model almost anything, but is best suited to modern, geometrical shapes and clean verticals. The long, straight lines of the vase accentuate the height of taller, more architectural flowers, which look particularly remarkable if the stems are spiraled around the base.

We recommend using some tall flowers in bright colours offset with greenery, such as citrus-fresh roses and antirrhinums and deep-blue delphiniums. Those shades and silhouettes definitely reveal a stylish swingin’ sixties influence, making it a perfect match for the Twiggy column vase.

If you’re going to be displaying your arrangement in a high-ceilinged room, place the vase on a mantelpiece or windowsill to emphasise the height of both the room and the flowers. You can also let the vase of flowers stand seductively in your entrance hall for a great welcoming effect – a bit like those pretty girls hanging at the doorway of Studio 54.

The hourglass vase – Marilyn: It’s not just film stars who look great with waspish waists. The Marilyn vase has a subtle curve in the middle, giving it a most voluptuous profile. Because it has a fairly narrow neck and isn’t as tall as the Twiggy, this vase is particularly suited to holding fewer stems without the flowers looking as if they’re lolling drunkenly on the sides.

You can create a floral tribute to Ms Monroe with a dozen peroxide-blonde roses in a white Marilyn hourglass vase. In that famous billowing dress, the American icon caused a stir wherever she went – stealing the limelight at dinner parties, lounging gracefully beside a sofa, reclining in the bedroom, and always looking fantastic. You’ll be pleased to learn that the same is true of the Marilyn vase.

The globe vase – Ella: This jazzy not-so-little lady of glass takes on the world by assuming its shape: a sturdy yet graceful sphere. Like Ms Fitzgerald, the Ella globe vase boasts soft curves and melodious proportions that go down a treat anywhere that kicking back and relaxing are a priority.
As any jazz great will tell you, there are better things to do than preening and pampering; they want to get straight to enjoying the music. The same goes for the Ella globe vase, making it perfectly suited to ready-made hand-tied bouquets that can be lowered in without fuss to provide instant delight.

Coffee tables, dining tables and any deeply dippy lowdown surfaces work for Ella – this vase is best to smile on from on over the rainbow, way up high. Our favourite freestyle combination is the a hand-tie of yellow calla lilies and safari sunset; the curve of the vase finishes off the sphere of the bouquet, with the narrow neck holding the flowers perfectly in place. Too marvelous for words…

But once you’ve chosen your vase, what next? Choosing a vessel that accentuates the beauty of your flowers is probably the hardest part, but that doesn’t mean the next step is as easy as throwing the flowers straight in.

First off, you’ll need to add some fresh water (room temperature works best, but use your discretion if there’s a heatwave and your air-con is broken) and pour in some flower food. The amount of water you use is up to you. Most flowers need to be in up to their ankles rather than their necks, but adding more water adds weight and stability to your arrangement. Too little water can also make your arrangement look unfinished or neglected.

Tip 5: Make sure your flowers are a cut above

This is where it can all go horribly wrong if you start acting on a whim. Pulling off any stray leaves that will be below the waterline is easy enough; it’s when it comes to cutting the stems that trouble can happen. One snip too high can be the downfall of all your careful planning this far.

We recommend placing your vase on the edge of a table and then holding each flower against its side, so that the bottom of the stem extends below the table edge. Move the flower up or down according to how much of it you’d like protruding from the top of the vase, and then make the cut. A good trick is to apply the 1/3 vase to 2/3 flowers ratio rule for column or hourglass vases, and use a 50:50 ratio with spherical vases.

This technique not only prevents disaster, but also saves time – you won’t be repeatedly placing each stem in just the right position in the vase only to pull it out again because it’s not the right length.

If you’re new to flower arranging, start with the greenery. Put the heavier, leafy stems in first and then add the flowers, one at a time. Foliage is great for adding texture; try some heart-shaped monsteria, broad aspidistra or willowy twigs.

You can also curl fatter leaves inside a clear glass vase, but this could get messy with frequent water changes (every three or four days is a good habit), and clean stems neatly placed are quite beautiful au naturel, especially if they have been hand tied.

If you’re stuck for inspiration, remember that you can’t really fail with a symmetrical arrangement. You could even mirror the flowers you’ve got by creating a zygomorphic or actinomorphic pattern. Which is just a fancy way of saying you can make your display radially or bilaterally symmetrical.

Tip 7: Reach for the mood

Shape is as important as colour for creating a specific floral ambience. Lofty tropicals in a Twiggy vase look dramatic and modern while slinky gerbera stems in Marilyn’s curves are the secret to a display that’s the exact opposite of fuddy-duddy. If it’s romance you’re after, try armfuls of sumptuous pink lilies and roses in a giant Ella, or kick back with boho-style blossoms reclining in a smaller glass orb.

Tip 8: The last rule in vaseology

You’ll like this one – unless you’re a pedant: once you know the rules, break them. Play around, have some fun and see what you can come up with.

Elden Ring patch 1.05 isn't exciting – but you should still download it

Fri Jan 20 , 2023
Elden Ring patch 1.05 has arrived, bringing with it a bevy of bug fixes for the action RPG but handful of specifically thrilling changes. The newest Elden Ring update, which is already dwell, focuses on improving the game’s stability and harmony. The patch notes (opens in new tab) detail fixes […] 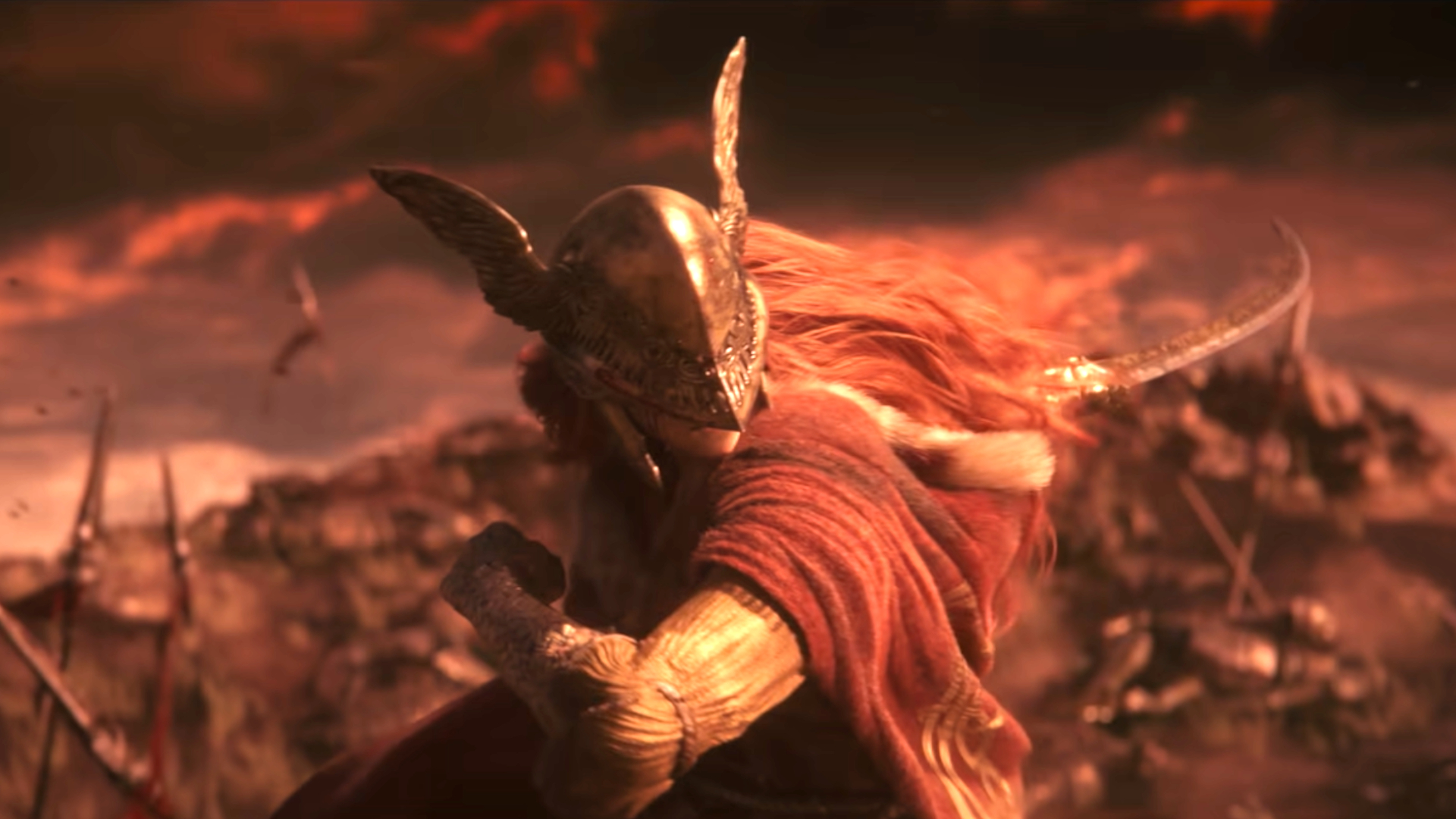