It all comes down to this for the Boston Celtics. With a win in Game 6 on Thursday night they’ll extend their season, keep their championship hopes alive and force a decisive NBA Finals Game 7. With a loss, their season will come to an end and the Golden State Warriors will win their fourth ring in the past eight years under coach Steve Kerr.

At one point, Boston held a 2-1 lead in the series, but two straight poor performances in the fourth quarter now have them on the brink of elimination. Especially deflating for the Celtics is the fact that they held Steph Curry scoreless from beyond the arc in Game 5 and they still weren’t able to walk away with a win. It seems unlikely that Curry is going to have two consecutive poor shooting performances.

The good news for the Celtics is that they have proved adept at bouncing back after losses in this postseason. They’re 7-1 directly after a loss in the playoffs, with their only loss coming in Game 5 against Golden State. If the Celtics are going to extend their season, they’re going to need to take care of the ball. They had 18 turnovers that led to 22 points for Golden State in Game 5, and that simply isn’t going to cut it against a team as dangerous and explosive as the Warriors. Boston will also need a big-time performance from Jayson Tatum, who has been held under 30 points in every Finals game so far.

If Boston can take care of the ball and get a standout game from Tatum, then perhaps this series will go the distance. Here’ a look at how our experts see Game 6 between Boston and Golden State shaking out.

How to watch NBA Finals Game 6

Bill Reiter: Klay Thompson may have found his shooting groove. Andrew Wiggins has officially resurrected his career, and all the promise that came with being a No. 1 overall draft pick. The Warriors’ defense has found its footing, holding the Celtics to below 100 points in three of the five games played so far in this NBA Finals. And, as you’ve surely heard, Steph Curry has a tendency to respond magnificently when coming off a 3-point-less outing. But the Warriors also have something critical at its disposal that Boston does not: The highs and lows of having been in past NBA Finals, and the lessons they impart. Sure, winning in the past helps to know how to do it again. But just as critical is the Warriors’ memory and experience of blowing a 3-1 series lead in the 2016 NBA Finals – and the first-hand knowledge of why they cannot let Boston off the hook now. Pick: Warriors +3.5 | Warriors 108, Celtics 99

Brad Botkin: I like the increased pressure Boston put on Curry in Game 5. He’s not going to put up a goose egg from 3 again, but I do think Steve Kerr is playing with fire running Curry off-ball more, which plays into Boston’s switching hands. I think Jaylen Brown plays better at home. I think one of the role players — Derrick White, Grant Williams or Al Horford — has a big night and Jayson Tatum can’t finish this poorly forever. Boston’s crowd is going to be bananas. Golden State isn’t a juggernaut. It has holes. Boston will find its way through enough of them to push this thing to seven. Pick: Celtics -3.5 | Celtics 107, Warriors 103

James Herbert: There are good reasons to pick the Warriors to close this out. Boston is coming off two devastating fourth-quarter performances, missing opportunities to take control of the series at home and to take advantage of a rare Stephen Curry off night on the road. All of Golden State’s role players are feeling good, and the Celtics have continually fallen into the same stagnant, sloppy play that almost doomed them at the very end of the Eastern Conference finals. In 11 of the 20 quarters in the Finals, Boston’s offense has been worse than Detroit’s 28th-ranked regular-season offense. But the Warriors have had nine even-worse-than-the-Pistons quarters themselves, and, until Game 5, neither of these teams had lost two straight games in the entire playoffs. I’m not sure how much game-to-game momentum matters, and, since I picked the Celtics to win in seven games, I’m going to stick with that. As bad as the vibes were late in Games 4 and 5, don’t forget how brutal Boston’s losses in Game 5 against Milwaukee and Game 6 against Miami felt at the time. Bad vibes are simply part of the Celtics experience! All evidence suggests that these two teams are evenly matched, so it’s only right that this thing goes seven. Pick: Celtics -3.5 | Celtics 114, Warriors 106

Colin Ward-Henninger: Ime Udoka has a good point when he says the Celtics have been just fine on defense pretty much the entire series. As has been the case throughout playoffs, if the Celtics take care of the ball they tend to win. I think they’ll do that in Game 6 with their livelihood on the line, which means the Warriors won’t be able to keep up offensively. Jayson Tatum will muster everything in his being to shift the narrative of his first Finals appearance, so I expect a prolific, efficient performance from him. Let’s go to Game 7. Pick: Celtics -3.5 | Celtics 114, Warriors 103

Jasmyn Wimbish: Before the series started I picked the Warriors to win in seven games, and I’m sticking to that. While I fully expect Steph Curry to bounce back from his uncharacteristic performance, I also think the Celtics rebound from back-to-back losses. Jayson Tatum said after Game 5 that the Celtics are a really hard team to beat when they don’t turn the ball over, and easy to beat when they do. Although that may be a simplistic explanation for Boston’s performance in Games 4 and 5, Tatum has a point. In the three losses the Celtics have in this series, they’re averaging 17 turnovers a game, compared to 12 in their two wins. If the Celtics cut down on the mental lapses — which oftentimes results in turnovers — they win this game. Pick: Celtics -3.5 | Celtics 116, Warriors 105

Michael Kaskey-Blomain: I picked the Warriors in seven at the start of the series, so I’m going to stick with that, even though I don’t feel particularly great about Boston’s chances of extending the series to a seventh game at this point. The Celtics held Steph Curry scoreless from long range in Game 5, and they still weren’t able to walk away with a win. This doesn’t bode well for them since it seems unlikely that Curry will have two straight poor performances shooting the basketball. If the Celtics are going to extend the series, they’ll need to take care of the basketball in Game 6. They had 18 turnovers that led to 22 points for Golden State in Game 5, and that’s just not going to cut it. If the Celtics can limit those turnovers and also get a big-time performance from Jayson Tatum, who has yet to score 30 points in a game in the Finals, then perhaps they’ll live to fight another day. Pick: Celtics -3.5 | Celtics 108, Warriors 100

Sam Quinn: I subscribe to the theory that Stephen Curry almost never has consecutive poor shooting nights, and the statistic making the rounds that he has shot over 52 percent on 3s in games immediately following outings in which he failed to make a 3-pointer supports that. If Curry is anything remotely like his typical self in Game 6, I just have a hard time picking the Celtics to win because, over the past two games, they’ve been completely unable to score. The Celtics have been held to just 98.5 points per 100 possessions—and just 82.1 points per 100 plays in the halfcourt—despite shooting over 37 percent from 3 in the past two games. This is simple. Neither team can score efficiently. Golden State has Curry. Boston does not. Like Steve Kerr, I expect the Warriors to finish this thing in Boston. Pick: Warriors +3.5 | Warriors 105, Celtics 99

Jack Maloney: The Celtics may have dug themselves too deep of a hole to win the series, but I refuse to believe they’ll go out by losing Game 6 at home. This team, for all its faults, has shown too much pride and resilience all season long for that to happen. Pick: Celtics -3.5 | Celtics 109, Warriors 100

Thu Jun 16 , 2022
(PA/Getty) Carole Middleton has been pictured wearing a bubblegum pink costume to the to start with working day of the Royal Ascot races this yr, the exact dress her daughter Kate Middleton was pictured sporting in 2021. The costume in concern is the ME+EM bubblegum pink shirt gown, which retails […] 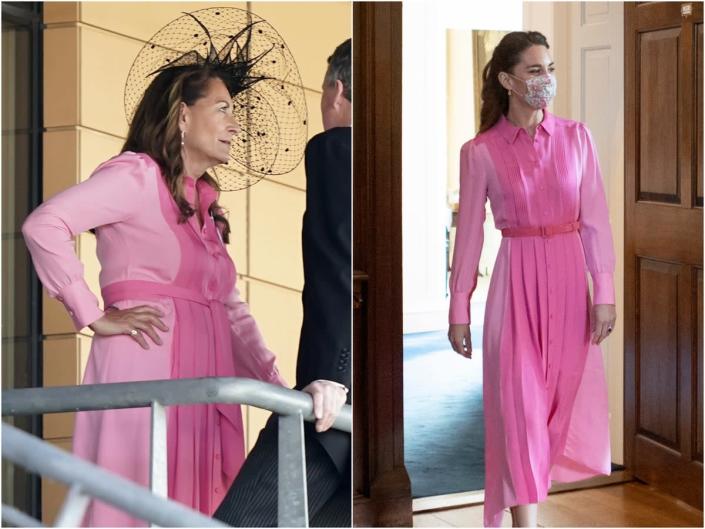